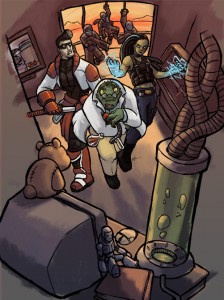 A recent arrival on the super power scene, Djinn is an alchemical ointment that is applied directly to the skin. Commonly it is mixed with henna and tattooed onto the person, leaving behind glowing markings. Relatively cheap as serums go, it gets its name from a unique property of the drug: after three applications, the user’s body builds up a tolerance to the drug, so further applications have no effect. The powers granted by Djinn tend to be permanent, but they are completely random. One use of the drug could grant you Mach 3 flight, while the next could grant you encyclopedic knowledge of cooking. Because there is no guarantee that a dose of Djinn will generate a useful power, the price stays relatively low. Djinn has gained a reputation as a “party power drug,” with college kids using it to get an ability that is relatively harmless. Surely, there is nothing harmful in a little fun…

In 1985, Cerulean battled a powerful genie named Marid whom he barely managed to defeat. Unable to destroy it, Cerulean bound the foe a mile underground in chains made of fourscore by fourscore by fourscore links. Each link would only be broken when the genie granted a wish. Soon after Ragnarok, an intrepid base raider found his way down to the cave and made the first wish: to be obscenely rich. Marid granted his wish by giving the base raider the recipe for Djinn. The truth behind the drug is that it creates a magical sympathetic connection between Marid and the user. Since each user is, in essence, wishing for powers when they use the drug, Marid is blind-granting wishes. The ointment’s magic, however, cannot change the genie’s limit of three wishes per person. Nonetheless, even with this restriction, Marid is rapidly approaching wish 512,000.

Dervish (6 skill points)
Power Tier: Superhuman(-2)
Time to gain power: One hour for tattoo application
Snag, Minor: User is effectively blind when traveling more than a mile with Dervish, as the whirlwind raises up too much dust and debris to see. Dodge, Move, Parry, Strike

Description: The user generates a personal whirlwind that surrounds and lifts the user half a foot above the ground. This whirlwind travels at super speeds, can deflect incoming damage, and grants the user the ability to attack either with the buffeting winds or with the debris caught up in the twister.

Description: A secret martial arts style created by North Carolina moonshiners during Prohibition, the Way of the Bootlegging Phoenix was a curious synthesis of alcoholism and animism. By getting mind-blastingly drunk on a special admixture of moonshine (Phoenx Fire), the martial artist learns to commune with one of the four Chinese Symbols, Ling Guang, the Vermilion Bird of the South. With enough training and booze, the student is capable of flight and making a person drunk through touch, and communing with Ling Guang with any form of alcohol. The fighting style fell out of favor when Prohibition ended, and was actively hunted down by the Ideal when they came to prominence. Avalon believed (probably reasonably) such power should not be in the hands of the permanently sauced. Very few bottles of Phoenix Fire still exist, but it’s possible to find a bottle at an abandoned distillery in the mountains or in a base. Just be careful how much you drink, else you’ll go blind.

Power Tier: Extraordinary (-1 Refresh)
Minor Snag: Variable may only be used to add + Unusual (Add the “On Fire”, “I CAN”T HEAR YOU!”, “On a timer” or similar explosive related aspects) + Spray or + Zone to the shoot effect.
Minor Snag: Dismantle must be used destructively.
Major Compilation: These “should” be stable…
Charges [Major]: You may only prepare enough explosives to use this skill a number of times equal to its rating per session.
Delay [Minor]: Setting a charge takes an action.
Dismantle + Unusual (Use a charge to not need tools), Information, Networking, Shoot + Unusual + Variable [Session]X3

Description: Through legitimate or illegitimate means you have learned how to make and “relatively” safely use explosive and incendiary devices.  You can use them to blow open doors and other bits of architecture or attack whole groups of combatants. Every session you may determine what kind of explosives you have prepared (modifying them with the variable extra). All explosives already have an unusual extra to represent the incendiary nature of the attack. Variables can be used to select a shaped charge, a fire bomb, a mine, etc.