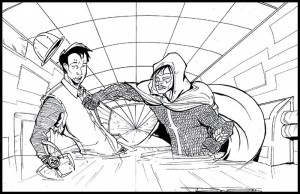 The world of Base Raiders can be extremely dangerous but the key to survival begins with character generation. Some threats are more obvious than others and it can be easy to overlook one when building a player character. The following tips should help you make a better character able to survive anything the game throws at you.

Staying Alive: Stress Tracks and You

Every player character in Base Raiders has 3 stress tracks (health, composure, and reputation) and whenever any one of them is reduced to 0, the character is taken out of the current conflict. Thus, it is imperative to have at least one skill that can defend attacks made on each stress track. You are only as tough as your weakest stress track, after all. FATE allows any character to make attacks on any stress track during any type of conflict, if the GM agrees the attack makes sense. This means that social attacks can take characters out of gunfights, for example. While you do not need to invest all of your skill points into defensive skills, know that a GM will prey upon your weaknesses sooner or later. Let’s look at each track in detail.

Whether a particular track can be attacked during a given conflict is left to the GM. If you want to specialize in one area, it’s perfectly fine to ignore one of the tracks, but it will almost certainly come up in game, sooner or later. Your combat monster may be taken out of a fight very early on if he can’t resist any mental or social attack at all. Remember that you can spend FATE points to boost or reroll skill tests and you can spend multiple FATE points to maximize your chances of success but every bit helps. A few points invested in Resolve and Contacting may be very useful, after all!

Of course the best defense is a good offense, so you need a way to inflict damage as well. Even non-combat oriented characters need a way to fight mentally or socially. Keep in mind that FATE does not distinguish between weapon types unless the weapon is a Gift or Strange Skill. A sniper rifle is the same as a pistol and a sword is the same as a punch, unless one of them has special properties.

The Power of Aspects

There’s more to resolving conflicts than avoiding and inflicting damage. Clever players can use aspects to win conflicts against opponents they have no chance of reducing to 0 stress in any track. While most players are content to just use their FATE points to invoke their own Aspects, you should look closely at the rules for Aspect Assessments, Declarations, and Maneuvers on page 100 and 101 in the Base Raiders rule book.

For example, Iconoclast (page 208) is being stalked by the deranged vigilante Scrap Man (page 216) in an abandoned base. Scrap Man is using his Strange Skill, Loot of Heroes, to give himself Notice + Unusual and Shoot. The Notice + Unusual is treated as a set of high-tech X-ray goggles while the Shoot trapping is an experimental plasma rifle. Iconoclast realizes he is too powerful to fight by herself. She needs to escape. She uses her Strange Skill Implanted Memories of a Genius to assess Scrap Man’s Aspects. Because Scrap Man uses technologically advanced gadgets, the GM allows it. She rolls a total of a +6 (+4 from her skill and a 0 0 + + with the dice) which beats the +1 difficulty that the GM set and learns he has the Untrained Power User Aspect. She also has the Impact Gift, which means she can declare a fragile Aspect on herself or her opponent because she obtained Spin (3 or more shifts above the +1 difficulty for the skill roll).

Scrap Man uses his action to scan the base and locate Iconoclast. He sees her through his X-ray googles. He prepares to fire the deadly plasma rifle at the hero.

Iconoclast uses both Aspects in her next action. First, she gives Scrap Man the Aspect “Voice Activated Prototype Weapon” and then uses Untrained Power User to say that the rifle can be made to self-destruct by saying the right sequence of words and Scrap Man left it with the factory default phrase. The GM requires another Implanted Memories of a Genius skill test to know this and sets the difficulty at +2. Iconoclast gets a +3, so the GM has the rifle explode in Scrap Man’s hands. He rules that the explosion inflicts 6 health stress on Scrap Man, which cannot be resisted. Scrap Man must take a consequence to remain standing, which he does. He takes a minor consequence, Stunned, to reduce the stress from 6 to 4. Iconoclast uses her next action to run before Scrap Man can recover. She could have doubled down and used her dart pistol to attack him, but she would have not been able to invoke his aspects against him again without spending FATE points.

As you can see, 2 skill tests neutralized a dangerous opponent, thanks to clever aspect usage. Not only was Scrap Man heavily wounded and stunned, he lost his ranged weapon for the fight. Even if Scrap Man recovers in time to chase Iconoclast, she can use Aspect Declaration to use the environment against her foe. For example, she could easily declare that the abandoned base has a “Malfunctioning Blast Doors” Aspect and then make a skill test to turn them on, thus trapping Scrap Man in the base.

This only captures part of the entire system, but it gives you an idea of what to expect in an actual game. Any character who covers the basic defenses and can overcome difficult challenges through skillful Aspect usage will go a lot farther than a specialist who only focuses in one conflict type. If you have more questions, feel free to post them here or on the RPPR forums.