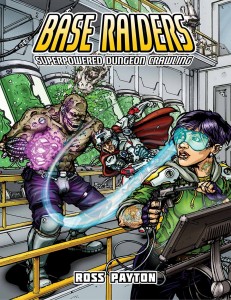 Superhumans used to keep the world in balance. A small but elite class of heroes and villains each wielded power like modern gods but their greatest legacy was to create a status quo where no one else would get superpowers. They thought it was better to accept a flawed world than try to change things too much for the better.

An extinction level threat removed every major hero and villain on the planet. Overnight, the status quo was gone. With the heroes and villains gone, some of their secret labs, bases, and lairs were discovered, raided and invaded. Looters and scavengers plundered them and sold what they found or kept it to empower themselves. Many other abandoned bases still wait to be discovered by the cunning and conquered by the brave. The old elite had decades to hoard treasures and acquire unique artifacts, prizes worth risking death from the traps and guardians left behind.

The first heroes and villains to reappear were not government, corporate or criminally backed soldiers. They were civilians, amateurs in the purest sense of the word. They had no fear of experimenting with the new discoveries, had no hesitation with altering themselves and had no shame in proving that they had learned how to become more than human. Most of all no one thought these amateurs would share what they had learned but they did. The secrets of gaining superpowers began to spread among the fringes of society.

Where once there were a few, now there are many. The superhumans of today are not enforcers of an old status quo. They want to change the world, in ways that can’t be easily categorized as good or evil. They are fools, madmen, idealists, fanatics, mercenaries, and base raiders.

Base Raiders is a complete FATE role playing game. It features:

About the Game Designer: Ross Payton is a writer and podcaster. His other books include Zombies of the World, a humorous field guide to 20 different species of undead and Road Trip, a complete campaign for Monsters and Other Childish Things. He has also written for Arc Dream, Posthuman Studios and Goodman Games, among other companies. His Ennie Award winning podcast, Role Playing Public Radio, discusses tabletop gaming and pop culture issues and attracts listeners from around the world. Ross lives in Springfield, Missouri.