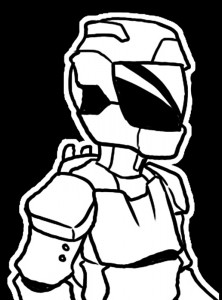 Minor Delay: Putting on or removing armor takes 1 full round

Description: The height of technology from Russia in the 1970s, the Dreadnaught Armor was designed to bring the fear of the Hammer and Sickle to the Americans. 10 feet tall and built like a tank, the red armor is seemingly impervious to all but the heaviest of artillery. Only 6 were ever constructed, but one suit fell into the hands of the villain known as Iron Curtain. After a few clashes with the Ideal, the armor was locked away, shuffled from base to base to collect dust. A bit rusty, the suit of armor is still in working order, from the servos and armor plating to the flight rockets and Tesla coil electricity blasters. The biggest downside to the armor is that it is completely voice controlled. Doing anything more complex then walking around means the operator has to focus solely on issuing the verbal commands to the suit, precluding the operator from talking to anyone else.

Thanks to Joe Thater for sending this power in! If you have a fan creation of your own, please send it in to rpprpodcast@gmail.com.