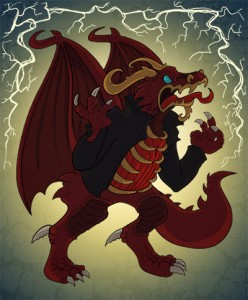 It’s hard to be an alchemist working for the Underground. All the magical beings hate your guts, thinking you’re a part of some history of butchers and serial killers obsessed with power. I guess a lot of us were in the past, but that’s changed. I stay above the board, working openly. I make effective potions, and never use magical beings. Hell, half of my profit goes to a blind man in Fiji who grinds kava in a specific manner when I could just ask to clean my cousin Flavia’s coffee mug for vampire spit to get the same effect. I still think the guy I rent to wants me to fail and ups my rent.

A girl browsing my wares looks behind the counter. “Is that shapeshifting potion for sale?”

“Is this enough?” She smiles nervously and pulls something out of her purse.

The girl hits all the right buttons for me; thick hair dyed an unnatural red with bows tying it in place, huge brown eyes (slitted, she’s clearly taken Chimera in the past), polka-dot dress, curves in the right places. She’s got the whole manic pixie dream girl vibe, like a chubby Zooey Deschanel. She’s also offering me a piece of Luytein tech for a thousandth of what it’s worth. All because she read Animorphs as a kid and wants to live that life.

I weigh this month’s rent against my conscience.

I affect a grumpy, world-weary exterior. “How old are you, kid?”

She gives me an uncertain look, obviously wondering if I’m some ageless being like you get in the Underground. “21.” I’m two years older than her.

I ask her about herself, telling her the questions are necessary to “fine tune the chimeric energies.” It’s a load of bullshit and I’m fucked if the Underground finds out I’m pumping customers for information. Luckily, she’s happy to answer my questions: she lives with her empowered boyfriend, this is her first time at the Black Market, she’s going to college, and she’s studying art.

“You know anything about biology, kid?”

I feel sorry for the kid. She just wants to be able to swim with the dolphins or fly with the eagles or some other hippy bullshit. I harden my gaze, try to look as cold as I can. “So you don’t. Gimme a moment, kid.” I check to make sure nothing powerful is in the shop and lock the door. “Come with me.”

I lead her through a back room where I keep some of the better stuff. Potions of flight and invisibility, stuff like that. Her eyes pop a little bit, but I gesture to keep moving. I start to speak.

“A true shapeshifting potion wasn’t invented until the 1960s. Alchemists in the past could make a potion that could transform a person into a different animal, and even allow them to transform back into a person, but that was a limited transformation. They were really only installing a metaphorical template that the imbiber could unlock, and it could go wrong. This is where you get the legend of werewolves in France.”

My workshop’s not a pretty place. It has this weird odor, like a mixture of cinnamon and formaldehyde, and a mild hint of decay. You never really get used to the smell. My old boss told me there was a way to get rid of it, but he never taught me how to before Ragnarok.

“That isn’t to say that alchemists never tried. Some captured magical beings and used them for ingredients in the potions, and that worked to an extent. But the test subjects would inevitably take on features of the being, and forget what they originally looked like.”

Jars full of crushed insects are scattered across the floor, all mislabeled and spaced out in a specific pattern only I understand. The walls are lined with dried plants that move like a squid’s tentacles. My old boss always said the Ideal couldn’t find you if you kept waving vines around your walls. I don’t know if it’s true, but I’ve learned to use their magical properties.

“Some potions just wouldn’t work. They were duds.”

The only free space is my workbench, and the locked door next to it. I unlock the door, look at the girl, and smile, making a point to smile a little too wide.

“M-my friends know where I am.” She stammers the words.

“Fine. They can come get you happy and healthy in a few minutes. I just need to show you something.” I swing the door open.

The room’s barely more than a closet, but it holds four large jars, the kind that can hold something the size of a large dog. I’ve attached a notecard to each jar.

I keep speaking. “Feel free to take a look. Other potions did something odd. Nothing happened when the person initially imbibed it, but things would go terribly wrong the first time he transformed.”

I point at the first jar and she looks, her mouth slightly agape.

“Sometimes, the animal would have extra limbs in place of other limbs.”

A fly the size of a big cat floats in the jar. It has no wings. It has no antennae. Instead, it has four extra pairs of legs in those spots, twisted and deformed. She hasn’t looked at the notecard yet, but I know what it says.

COD: Too large to breathe through spiracles.

I point to the second jar.

“Other times, it just wouldn’t be able to move.”

This jar’s a diorama. A dog stands stock still in it, looking to be a taxidermy animal. I sprayed it with a humectant earlier in the day, to make sure microbes wouldn’t devour it.

“When the animal eventually died, alchemists found that its skeleton was entirely fused.”

I watch the girl. She’s finally noticed the notecards. I hold back a shudder and point to the third jar.

“Some would have no pigment and deformed features.”

An albino sea turtle floating in formaldehyde. It has one eye on its lower jaw, and the jaw itself covers two thirds of its face. Its single nostril lies on its neck. Its shell is crushed open, as if someone dropped a rock on it. The girl vomits. I watch, disassociated from the scene. Partially digested burrito spatters the floor.

“These animals would live for a while.”

I move to stand in front of the door. I feel the panic and guilt welling up inside of me, getting ready to burst out into a torrent of confession and excuse. I threw up when Frank looked at me, into my eyes. It took me hours of vodka to get up the courage to put him out of his misery. I don’t know if he understood what was happening. I don’t know which would be worse.

My voice cracks as I continue. “Others would just turn into meat. A blob of nervous tissue.”

The thing in the fourth jar looks like a mass of fat: yellow-brown and twitching. I don’t know why I put holes in the jar. The thing in it barely exists anymore.

The girl begins to scream. “Let me go! Let me go!”

The girl tries to shove me out of the way. She’s strong, far stronger than she should be for her size, but I’ve sampled enough of my wares that I don’t budge. “Why are you showing this to me?!”

I take a deep breath, doing my best not to collapse. “I said that alchemists didn’t create a true shapeshifting potion until the sixties. That isn’t true. We had gotten it right hundreds of years ago. All of the mutations were user error. We did not understand biology well enough yet. And trying to transform without a complete understanding of how the body forms…

I move out of the door, and the girl sprints for the exit. I walk slowly after her and unlock the door. She rushes out and I lock up again, head back to the workshop, clean up the vomit. The girl had lost a bow at some point. The twisted shape reminds me of the specimen in— of Jane’s deformed legs. I take a deep breath, exhaling slowly. The girl didn’t ask the one question I dreaded. I mumble it to myself.

“Why do you have these people?”

4 comments for “Fiction: Changes Over Time”