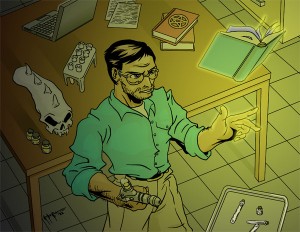 The first superhumans to emerge after the old heroes and villains disappeared were not government, corporate, or criminally backed soldiers. They were civilians, amateurs in the purest sense of the word. They had no fear of experimenting with the new discoveries, had no hesitation with altering themselves and had no shame in proving that they had learned how to become more than human. Most of all no one thought these amateurs would share what they had learned to any that asked them. But they did.

How did they become empowered? Mostly by plundering the countless hidden bases around the world. These bases were built by super technology or magic and were used as armories, safe houses, workshops, and labs. But once their owners disappeared, they began to be discovered. Inside many of the bases were superpower sources like:

Western Super Soldier Drugs
Think bleeding edge steroids and performance enhancing drugs. Enhanced strength, agility, and speed. But not just that. Enhanced low light vision. Moderate regeneration. Resistance to mind control powers. Bone density enhancers to handle the strength. All with relatively minor side effects. Of course the drugs are only safe if properly administrated by a trained team of doctors and biochemists but that didn’t stop desperate base raiders from trying them for an edge in power.

Soviet Super Soldier Drugs
The super soldier arms race in the Cold War led to the creation of many programs that eventually made their way into the hands of heroes and villains. Soviet drugs offer more raw power but with even more risk than American drugs. Soviets preferred strength over agility. A soviet super soldier could pick up a tank and throw it – but such a feat could only be done once. Alternate drug programs could grant psychic powers. The top of the line was the Widowmaker – a blend of psychic boosters and performance enhancers that granted precognitive and telekinetic powers that seemlessly blended in with martial arts training. The brutal side effects typically drastically limited lifespan or have other power side effects.

Tunguska artifacts
During the Cold War, the Soviet Union discovered an easily manipulated natural dimensional portal in Tunguska, Siberia. They recovered many artifacts and samples from other universes. Unfortunately in 1987, they stumbled across a hostile alien macrocosmic being, too large to fit through the portal. It tried to force open the portal so it could move through but it was driven back after months of fighting. The dimensional portal became unstable and uncontrollable. The sheer costs of stopping the Event and containing it bankrupted the USSR. They collapsed in 1989.

Today the Exclusion Zone is as big as Massachusetts and a permanent UN security garrison is kept there to contain it. Still scavengers and looters sneak into the zone for artifacts to sell on the black market.
Alien weapons and other devices make it on the black market. Most are useless or only dangerous to the user but every once in a while, a diamond in the rough is found.

Omega-Tech
Omega was the world’s most powerful supervillain before his disappearance. He conquered a large swathe of Eastern Europe and ruled it with an iron fist. As a super genius, Omega mastered super-science and magic and was focused on killing all superheroes and conquering the world. Eventually, the US invaded Omega’s country with the help of a massive group of superheroes. Omega was hopelessly outmatched but in a move of desperation unleashed mystic weapons of mass destruction. They backfired and Omega was killed or banished. His people had suffered the most from the invasion and had to be relocated as the mystic weapons had made the country unlivable.

One Omega financed his country by selling his super-science and sorcery to criminal syndicates and third world despots. Knock offs and imitations have flooded the market since his disappearance. Power armor and mystic potions that grant temporary powers are especially popular.

Cerulean’s Library
A mystic visionary and hero – Cerulean had a vast library of magical grimoires. It has been raided and many of the books have turned up in the oddest places. Most are normal but a few spellbooks have gotten out. A few have even been digitized and made available on various websites and file trading communities.

Alien Invasions
Three alien invasions hit the earth in the last 60 years. Each left behind at least a few crashed alien ships loaded with strange tech. Most were seized by Earth governments but many smaller scouts and fighters crashed in isolated areas. The heroes that kept the crash sites guarded or hidden are no longer there to prevent the curious from exploring the wreckage.

These are only a few of the more common power sources but thousands of humans have gained superpowers already from these power sources. It’s only a matter of time before other power sources become common, as more bases are discovered and looted.

2 comments for “DIY Superpowers: How to become more than human on a budget”