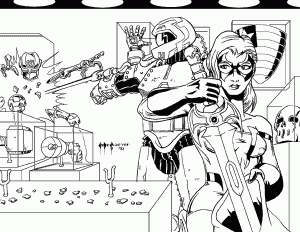 Abandoned superhero and villain bases are being discovered and looted around the world. Most of the raiders exploring the bases have given themselves superpowers by using the technology and magic found in them.

Who built the bases? A small cadre of superheroes once protected the Earth from supervillains and other global threats. Not too long ago, an alien ship appeared in orbit above the planet. It teleported every superhero and villain into it and then vanished without a trace. No one knows what happened to them but the need for heroes to protect the world is greater than ever.

Why are the bases being raided? Only a few months after the superhumans disappeared, a few civilians found the hidden base of a superhero. They found powerful weapons and equipment and instead of selling it, the civilians used the gear to save lives and fight crime. Word spread quickly and soon more bases were discovered. The first raiders boasted of their findings and some sold or gave the knowledge they found, enabling countless people to gain superpowers. Soon knowledge of the bases became public and thousands around the world began searching for them.

Why are there so many bases? It seemed that the heroes and villains had built countless bases around the world. Using super-science and alien technology or magic, it was trivial for a lone superhuman to build a large base. It was also necessary. The superhumans needed infrastructure to support their endeavors. They need armories to build and maintain their gear, medical bays to heal their injuries, labs and archives to conduct research, and safe houses to rest in. But neither hero nor villain could use normal facilities for their work. After all, they existed outside the law and any publicly known base was a target for attacks

Aren’t the raiders just thieves? There was another need for the bases: prisons and storehouses for beings and objects too dangerous to be allowed to exist in the outside world. Sapient doomsday weapons itching to detonate. Self-replicating robot armies. Demonic gods eager to take over the planet. Immortal serial killers and worse. These prisons are now unguarded. Heroic base raiders have to find and stop these time bombs before it’s too late.

What kind of dangers can the raiders expect? Most of the bases contained many traps and guardians. Robots, sentry turret guns, mines, mystical wards, bound demons, or undead assassins to name but a few potential challenges. Any hero or villain worth his title had to contend with deadly enemies that could attack at any moment. As a result, many of them only felt safe in a fortress, with vast numbers of traps and guards to protect them. Of course, being who they were, they usually had access to the most advanced technology or the most potent magic. Base raiders can expect virtually anything whenever they delve into an abandoned lair or hideout.

How do you find a base? These bases are hidden well so finding one is often an adventure in of itself. Some raiders investigate the missing heroes and villains, looking for patterns of activity to deduce where their bases would be. Other raiders use whatever advanced tech or magic they have to uncover one.Some will simply track down the friends and allies of the missing superhuman and bribe or coerce them into revealing the location. This doesn’t always work, as both the heroes and villains were notorious for keeping many secrets. A few stumble into them by blind luck. Many base raiders got their start this way, as they used whatever they found to jumpstart their careers as raiders. Finally, a few notorious raiders simply follow more successful base raiders until they lead them to a base. Then they drive off or kill the competition, claiming the base for themselves.