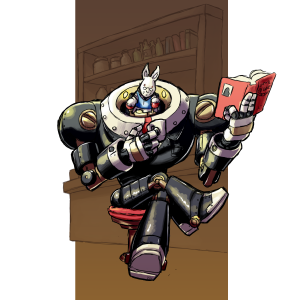 In 1971, the Demiurge, an insane wizard with incredible reality altering powers transformed parts of Ohio to match a popular series of childrens’ novels about Peter Silvertail, a charming quick witted rabbit. Adult humans were transformed into plants and animals were given sapience by the Demiurge. The superhero Cerulean, a powerful mage,  eventually transformed Ohio back to normal but the newly created Peter Silvertail liked being intelligent and persuaded him to let him stay as he was. Peter and a child he had befriended during the ordeal went on to star in several movies but by 1980, the popularity of the novels and movies had faded.

Peter faded from the spotlight but took on a secret human identity, as rabbits are not granted constitutional rights (intelligent or not). In order to appear human, Cerulean gave Peter a magical automaton that the rabbit could pilot and granted him the ability to appear human.

He went to law school and became a lawyer for superheroes. Peter became famous for his legal acumen and incredible charm in the courtroom. However, in 1997, his human identity was uncovered when he attempted to enter the Supreme Court to argue Kato v. Meerman, an eminent domain lawsuit.

The US government had placed secret wards to guard against magical intrusion and illusions and the spells used to conceal Peter’s true nature were revealed. He was disbarred and became a general servant/behind the scenes fixer for a group of superheroes. When the heroes and villains of the world disappeared, Silvertail went into hiding.

Some fans want him to make a new series of movies. Of course, without legal protection or status, any royalties he may have earned in the first Silvertail films have gone upaid. Furthermore, anti-magical extremists and religious fanatics tend to attack any magical beings. Superheroes like Cerulean used to protect magical beings but in the last year, hundreds of them have been killed.  Some speculate that Peter Silvertail may play a central role in a possible push to reform the laws and grant magical beings and other nonhumans civil rights. Until he resurfaces, no one will know.